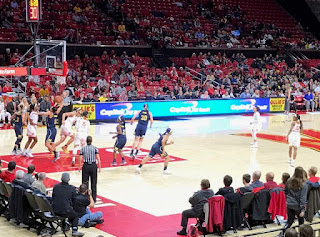 The plan was to go attend the women's game which began at 6 while Stan taped the Men's away game which began at 7. After the Maryland Women's win, we picked up a pizza and went to Stan's house to watch the Men's game which had already ended. Since Stan fast-forwarded through the commercials and time-outs, it only took about an hour to watch the whole game; the whole game up to 53 seconds, that is, because that's when the screen went blank. Uncharacteristically, Stan had screwed up setting the timer. Up to then all four of us had been good about not checking our smart phones to see what the final score was, but we certainly immediately went to them at that point. Maryland was ahead by about 3 or 4 points when the image died, and with that lead with that little time left the team ahead would win the majority of times. But certainly not every time, so we had a few seconds anxiety before finding out the men also won.
Posted by DJones at 2:03 PM