The Great Blue Heron who took a stroll

As I was walking along the Paint Branch Trail this morning I spotted something I hadn't seen before--a large bird walking towards the pond. I have to admit I was hoping it was a wild turkey which wouldn't have been out of the question at all because I've been hearing reports of them showing up in the suburbs lately. After approaching the pond quietly, I wasn't disappointed to see what it actually was, however, since the big herons are always fun to watch. 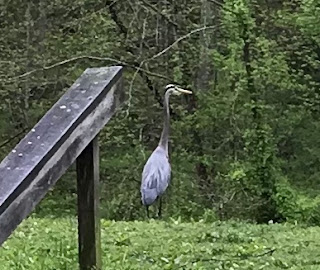 Given the direction the bird was approaching from, I think the Great Blue Heron had been hunting for fish in the creek and then decided to try his luck at the pond. (As a fisherman, I tend to think I understand their actions.) He decided the distance was too close for flying, so he chose to walk.