Yesterday afternoon from our deck

It was an unseasonably warm, beautiful Sunday. In anticipation I mowed the lawn, front and back and I hope for the last time this year, and did other yard work on Saturday, so I could goof off without guilt yesterday.

I admired the gardens from a number of vantage points and visited the park a couple of times. Knowing that there will be few days remaining when a person can relax outside in the sun makes days like this even more precious. From the deck I was contemplating the foliage change and periodically checking the movements of the clouds from the strong northerly winds when I noticed these cloud patterns which I found satisfying.

Posted by DJones at 4:16 PM No comments: 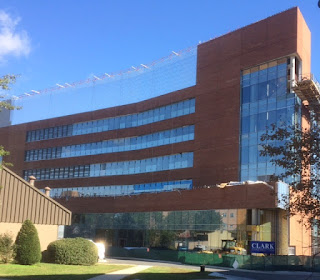 New construction has been common at the University of Maryland, and three days a week I check out the progress of a 184,000 square foot building named for an alumnus and built by the company he founded, Clark Construction.

Having been involved in much more modest construction projects during my working years, I marvel at the scope of this one.
Posted by DJones at 12:03 PM No comments:

During the past few weeks, I've sometimes seen as many as 25 geese on the pond and wondered if they were migratory or residents visiting from a nearby home area. Seeing 65 today leaves me little doubt they are migratory. Some of them are pictured here. 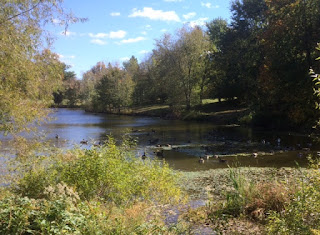 Posted by DJones at 3:10 PM No comments:

Speaking, singing, and praying to rivers

A few days ago the newspaper ran a story about a group of Native Americans who were traveling the 405 mile length of the Potomac River to spiritually thank the river and to wish for the health and recovery from the ills brought upon the waters by humans. The ritual involves songs, speech, and prayers and carrying a container of water from the relatively clean section at the headwaters and pouring the water into the more troubled lower part to "give the river a taste of itself."

I have spent time on all sections of the Potomac but have never thought to speak to it. While near some small streams which ultimately empty into the river, I've sometimes felt they were speaking to me, the often described "babbling brooks", but I've never been able to understand any words. The river has given a lot to me, wonderful hours of fishing, boating, and kayaking, and maybe it would be a good idea to thank the waters myself and hope that it understands. Maybe the river communicates best with the Native Americans in their language. I certainly wish them the best in their river ritual because the Potomac can use any help it can get, spiritual as well as scientific.

The Potomac is one of the rivers I know best. The other two are the Patuxent and the Patapsco, and I spent yesterday afternoon fishing for trout on the Patapsco. The trout were unwilling but the bluegill were receptive so I had an enjoyable day, and next time I'll try to remember to give thanks.

Posted by DJones at 4:59 PM No comments:

Bob Dylan: Winner of the Nobel Prize for Literature

Hearing the announcement a few days ago put a smile on my face for the rest of the week. When I was young it was common to hear that rock music was a trivial fad, and those of us who thought there was lasting worth were on the defensive about the sound and words we loved. Maybe I have continued to be haunted by this defensiveness because I finally feel vindicated by Dylan's official recognition in being awarded the Nobel.

Dylan's lyrics had an effect upon my life. I never questioned the segregationist environment of my youth until the civil rights revolution of the 1960's crashed into my suburban life, and Dylan's music was part of that soundtrack. "How many times can a man turn his head and pretend that he just doesn't see" not only called attention to racial injustice but also redefined manhood. There must have been millions of other teenage boys who, like me, suddenly had an alternate measurement of what it was to be a man, a measurement more noble than physical toughness or sexual prowess.

Dylan's words also inspired and expanded our imaginations. I've been listening to this song for over half a century and the imagery never fails to grab me:

"Take me disappearing through the smoke rings of my mind
Down the foggy ruins of time
Far past the frozen leaves
The haunted frightened trees
Out to the windy bench
Far from the twisted reach of crazy sorrow..."

For those of us for whom Bob Dylan has been our Mr. Tambourine Man for most of our lives, we somehow feel that the Nobel Prize award was for us too.
Posted by DJones at 10:06 AM No comments: 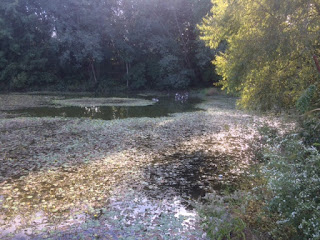 It's perfect weather for taking a walk and stopping occasionally to soak in the sun, especially while knowing that the days when it's comfortable to sit outside are growing fewer. 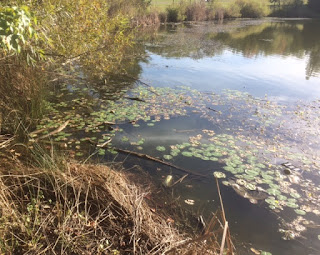 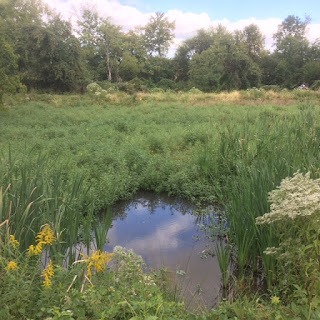 If I didn't know where the above photo was taken, I might guess it was along a Maryland tidal river. Actually the scene is within the University of Maryland campus in College Park. 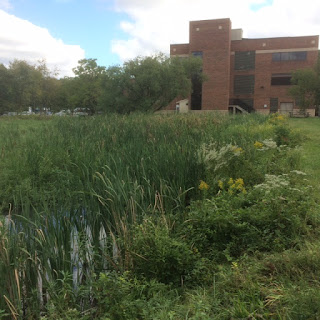 It's clear to me that the site has been landscaped as very little of the 1,250 acres of the campus is in an untouched natural state. I've previously featured the various gardens created throughout the grounds of the University, but I keep encountering hidden gems like these wetlands.
Posted by DJones at 10:24 AM No comments:

Awakened by an owl's hooting

We don't often sleep with the windows open because it's usually either uncomfortably cold or hot, but there are periods in the spring and fall when we can. Recently an owl's hoots woke me in the middle of the night. We've heard owls here before, sometimes as we were just getting to bed, and it's always a nice sound with a distinctive rhythm. From what I just heard on YouTube, I'd say it was a great horned owl.

The next few nights I've hoped for a repeat performance and have been a little disappointed not to hear it. Maybe tonight.
Posted by DJones at 8:39 PM No comments:

The new bedding area where the tree was uprooted last year is filling in nicely. 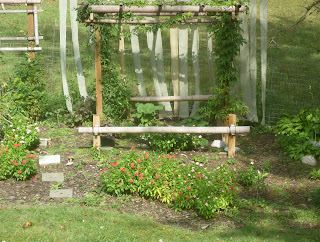 These annuals were planted a previous year but came back:

Posted by DJones at 6:29 PM No comments:

Status of the park geese

The resident geese population has been 40-50 for the past few years, a number that the park authorities decided was excessive. Park management were likely influenced by people who complained about the large amount of goose excrement on the walkways and on the baseball fields, and a few months ago an attempt was made the eliminate the geese. The attempt seemed to be successful although lately we began seeing small numbers of the birds. 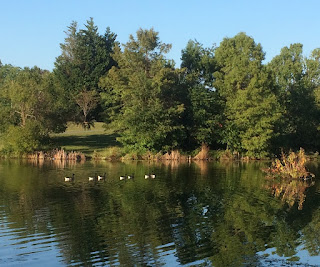 It's too early for these to be migratory, so I'm assuming these were resident geese who had made their home area elsewhere until recently.
Posted by DJones at 6:20 PM 2 comments: